In part 1, we set up a Tomcat cluster with parallel deployement and cluster-wide deployment. Go back to the first part if you have not read it, this article assumes that you have read it.

Installing Varnish in front of everything

Now, let’s install Varnish. For this to work, you need the curl vmod. Installing this vmod is outside the scope of this post, so it is assumed that it is already installed.

As a reminder, the problem we have is that the cache of the 2 versions of the app will be mixed up in Varnish since they have exactly the same URLs.

The solution for this is to modify the vcl_hash function in Varnish and to introduce the app’s version in the objects identifiers in the cache.

Of course, now we have to fill this “X-Version” header with some data. Here is the code you need:

Let’s walk through this:

For this to work, a few things must be implemented in the app:

+ Astuce : the caching policy is here implemented in the app: it sends the responses with the right Cache-Control headers to tell Varnish what to cache and for how long.

! Avertissement : a lot of the VCL code has been stripped from this example. You still have to implement the rest of the configuration around this. This depends on your app. 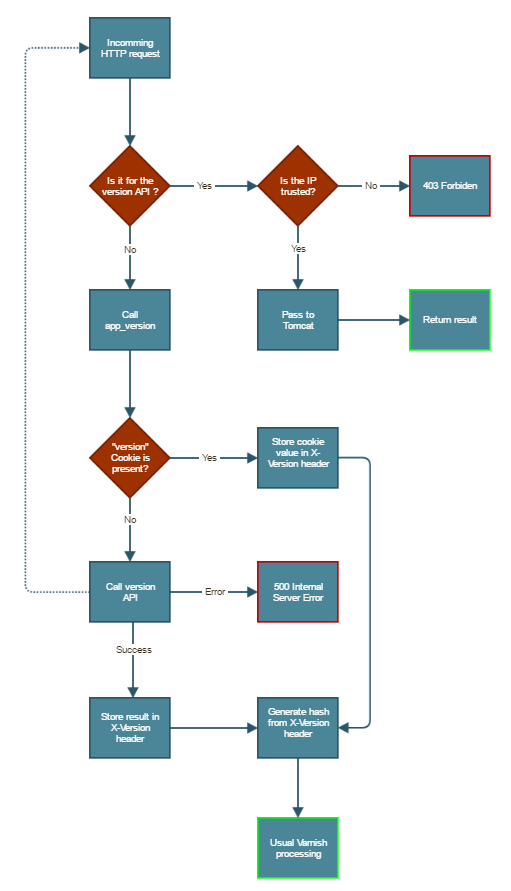 Here is a graph of the trafic on one of our Varnish servers during a deployment.

The deployment was made just after 9a.m. You can see a (very) little drop in the hit rate on Varnish. This is because new users arrive on the new version of the app and Varnish has no cache for this new version. But since at this moment most of the users still are on the old version, Varnish still serves most of the requests from its cache. As time passes, the cache for the new app warms up and more and more users are on the new app. The two processes (cache warmup and trafic transition to the new app) naturaly occurs at the same time, keeping the hit rate in Varnish high. On this infrastructure, the old app is usually undeployed 30 minutes after the new one was deployed.